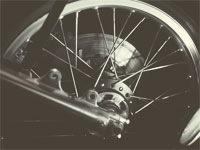 Every year - especially in the summer time - millions of Americans take to the roads on their motorcycles. It is a leisure activity for some, and a main source of transportation for others. Louisiana's best motorcycle accident lawyers know the roads and the arguments made when and accident occurs. There are quite a few benefits to riding a motorcycle instead of driving a car, such as lower insurance rates, less gas consumption, and - let's face it - it's just plain fun. Motorcyclists have every right to operate these vehicles on our nation's roadways, assuming that they are properly licensed. New Orleans best motorcycle lawyers make sure that if you get into an accident you will receive the money you deserve. Unfortunately, the downside is that throughout the country every day motorcyclists are involved in serious, and potentially fatal, accidents involving other vehicles.

Although some people may assume otherwise, motorcyclists have the same rights as drivers who are in a passenger vehicle, pickup truck, or sports utility vehicle. Motorcyclists have the same obligations too, such as driving at an appropriate speed, signaling turns, and operating their vehicles in accordance with the traffic and weather conditions at any given moment. Many motorcyclists take additional precautions as well, which can include wearing a helmet and other approved safety gear, or perhaps wearing bright colors when riding to improve how visible they are to other drivers. However, it seems that no matter how many precautions or how intent motorcyclists are on driving defensively, some will still be struck and injured by other vehicles.

There are a variety of non-profit and government entities that recognize the danger posed to motorcycle riders, and many people have probably seen efforts to increase awareness of motorcycles on the roads. The National Highway Traffic Safety Administration, for example, encourages a "Share the Road" program in an effort to ensure that drivers in passenger vehicles are on the lookout for motorcyclists. Private organizations are involved in similar efforts, particularly those who make an effort to advocate for the rights of motorcycle riders and passengers. Raising awareness and attempting to make drivers aware that motorcycles are on the roads too is a laudable goal, but the effectiveness of these efforts can be questioned by motorcyclists and their family members who see the serious repercussions of a collision involving a motorcycle and another vehicle.

These types of accidents can leave a motorcyclists or a passenger with severe injuries. Riders and their passengers don't have the benefit of being encased in a metal frame like drivers and passengers in other vehicles, and as a result the injuries they suffer in these collisions can be of a far greater magnitude than someone in a car or truck could experience. Motorcyclists who are in a car collision will often suffer from broken bones, road rash, internal injuries, and even head trauma - regardless of whether or not they were wearing a helmet.

One of the most important pieces of evidence in any car accident, but especially in one involving a motorcycle, is the police report concerning the investigation conducted by law enforcement officials at the scene of the crash. These police reports often attempt to determine who was at fault for the accident, and why. Did the driver forget to check a blindspot when changing lanes? Did the driver make a turn while failing to observe a motorcycle coming from the other direction? Or was the driver distracted by an electronic device or something else in the car that diverted attention away from the task of driving? All of these causes, among many others, may come into play in an accident that involves a motorcycle. Any conclusions made in a police report could prove to be crucial to the success of a claim.