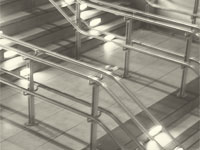 The plaintiff, or the injured person bringing the lawsuit, has the burden of pleading and must show facts that, if true, would grant the plaintiff relief in the form of damages. If the facts could grant the injured party relief, they then have the burden of persuasion, meaning they must convince the jury. In a slip and fall case, the plaintiff must show how the defendant didn't meet their standard of care and thus was negligent.

There are two approaches to slip and fall cases in the United States, the first, known as The Traditional Approach, is followed by 26 states, including Louisiana (La. Rev. Stat. ß 9:2800.6(B), and requires showing that the danger existed and caused the injuries, and that the owner failed to use reasonable care to cure the dangerous conditions. These cases usually come down to whether or not the injured party can prove that the owner knew or created the condition, or that the condition existed for so long that the owner should have known. Proving this 'constructive notice' (proof that the condition lasted for such a time that the property owner would have discovered the condition if he had exercised reasonable care) usually depends on proving the length of time the condition existed, which is evidenced by how old the condition looked (for example, a brown banana peel has been on the floor longer than a yellow banana peel), video evidence, or whether or not a liquid had dried or was still wet.

The other approach to slip and fall cases is called the Mode of Operation Rule and is followed by 24 states. This approach focuses on the type of business in determining whether notice is necessary for the property owner. For example, there is no need to prove the owner knew or should have known of the dangerous condition if the condition was reasonably foreseeable in the course of the owner's business. For example, a gas station can reasonably foresee a small gasoline spill, or a business that has a self-serve beverage machine can reasonably expect someone to spill a drink on the ground. Before bringing a lawsuit in a slip and fall case, it is important to look into your state's law to see which approach is followed.

If the injured party proves the Defendant's negligence, they can recover damages, otherwise known as compensation to restore the injured to the same position they were in prior to the accident (to the extent that you can). Although money cannot restore someone's loss of enjoyment of life or permanent injury, it is the closest way to restore someone to their previous health. Damages that are available include compensatory damages, which are current and future losses from the accident, including medical expenses, lost wages, any loss in earning capacity (if you cannot return to work) and damages for physical pain, emotional distress, loss of enjoyment of life, and any loss in function or appearance to your body.

If you have been injured in a slip and fall accident in the Louisiana area, which you believe is due to a property owner's negligence, we'd like to hear from you. Call us (504) 521-6000 or contact us online for a FREE consultation.